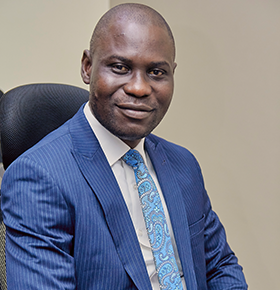 ADEBIMPE Kayode Enoch is young, sharp, and a goal-getter. He holds a Higher National Diploma in Accounting with upper credit division. He is a seasoned professional Accountant and an Associate Member of the Institute of Chartered Accountants of Nigeria (ICAN). He is also a holder of Diploma in International Financial Reporting Standard (DipIFR – ACCA UK)

He commenced his career with Bashiru Fafunwa & co as an Audit Trainee. He later joined Food Concepts Nig. Limited as Treasury Officer from 2006 to 2008. In 2008, he joined Olabisi Ijiola & Co (Chartered Accountant) as Audit Supervisor. He also worked with aac practice now Goldwyns Nigeria as an Assistant Audit Manager between 2011 and 2014.

In 2014, Kayode Adebimpe joined Jubilee Life Mortgage Bank Limited as a Financial Accountant in Finance and Strategy Department of the bank later became the Head of Department (HOD) . He is currently Head, Internal Audit and Compliance of the bank.