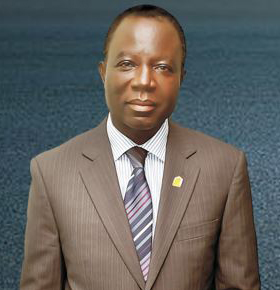 Iyiola Adegboye, a chartered accountant, holds Bsc second class honors in Management and Law from the London School of Economics (University of London). He also holds an MBA in Finance with distinction from LagosState University and an MSc in Psychology from the University of Ibadan where he graduated in the first place and as an overall best student. His professional qualifications include FCMA, ACMA, ACA, and ACIS. He started his working career in 1985 at Delloite and Touche, where he observed his NYSC primary assignment as an Audit Senior between 1985 and 1986 before joining UAC of Nigeria Ltd.

He spent about seven years as an Accountant in various Divisions of UACN. He worked as an Accountant at Kingsway Stores between 1986 and 1987 and Divisional Management Accountant at UAC properties. While at UAC, he was a member of the company restructuring squad and a member of the Budget Committee. He left UACN on January 20, 1992, to join Intercontinental Bank Plc as the pioneer Head of the Corporate Planning Department. He rose to the position of Financial Controller of the Bank before he was seconded to the then Equity Bank in charge of Finance, Administration, Human resources, and Training Departments. At Equity Bank, Mr. Adegboye rose to the position of General Manager in charge of Finance, International Operations, Branches Development, and Western Region Operations. He held this position till 2002. He left Equity Bank and joined Lagos Metropolitan Area Transport Authority as Director of Finance in charge of Finance and Budget, a position he has held till date.

He is a Board member of Sunrise Micro Finance Bank, Worldwide Projects and Properties Ltd, and SQUA Inspection Services Ltd. He is widely traveled and he has attended several courses in management and finance both at home and abroad. He is also an active alumnus of the University of London, Lagos Business School, and Oxford Institute of Certified Leadership and Management. A man always calm and cool is deeply rounded in his chosen field of Finance and Management. He has many awards to his credit, and he is alive to happening around him and worldwide. For leisure; he plays Tennis, catches up with global development on CNN, and reads management books.